Just a few months ago, Jazmine Boykins was posting her artwork online for free. The 20-year-old digital artist’s dreamy animations of Black life were drawing plenty of likes, comments and shares, but not much income, aside from money she made selling swag with her designs between classes at North Carolina A&T State University.

But Boykins has recently been selling the same pieces for thousands of dollars each, thanks to an emerging technology upending the rules of digital ownership: NFTs, or non-fungible tokens. NFTs—digital tokens tied to assets that can be bought, sold and traded—are enabling artists like Boykins to profit from their work more easily than ever. “At first, I didn’t know if it was trustworthy or legit,” says Boykins, who goes by the online handle “BLACKSNEAKERS” and who has sold more than $60,000 in NFT art over the past six months. “But to see digital art being bought at these prices, it’s pretty astounding. It’s given me the courage to keep going.”

NFTs are having their big-bang moment: collectors and speculators have spent more than $200 million on an array of NFT-based artwork, memes and GIFs in the past month alone, according to market tracker NonFungible.com, compared with $250 million throughout all of 2020. And that was before the digital artist Mike Winkelmann, known as Beeple, sold a piece for a record-setting $69 million at famed auction house Christie’s on March 11—the third highest price ever fetched by any currently living artist, after Jeff Koons and David Hockney.

NFTs are best understood as computer files combined with proof of ownership and authenticity, like a deed.

Like cryptocurrencies such as Bitcoin, they exist on a blockchain—a tamper-resistant digital public ledger. But like dollars, cryptocurrencies are “fungible,” meaning one bitcoin is always worth the same as any other bitcoin. By contrast, NFTs have unique valuations set by the highest bidder, just like a Rembrandt or a Picasso. Artists who want to sell their work as NFTs have to sign up with a marketplace, then “mint” digital tokens by uploading and validating their information on a blockchain (typically the Ethereum blockchain, a rival platform to Bitcoin). Doing so usually costs anywhere from $40 to $200. They can then list their piece for auction on an NFT marketplace, similar to eBay.

At face value, the whole enterprise seems absurd: big-money collectors paying six to eight figures for works that can often be seen and shared online for free. Critics have dismissed the NFT art craze as just the latest bubble, akin to this year’s boom-and-bust mania around “meme stocks” like GameStop. The phenomenon is attracting a strange brew of not just artists and collectors, but also speculators looking to get rich off the latest fad.

A bubble it may be. But many digital artists, fed up after years of creating content that generates visits and engagement on Big Tech platforms like Facebook and Instagram while getting almost nothing in return, have lunged headlong into the craze. These artists of all kinds—authors, musicians, filmmakers—envision a future in which NFTs transform both their creative process and how the world values art, now that it’s possible to truly “own” and sell digital art for the first time. “You will have so many people from different backgrounds and genres coming in to share their art, connect with people and potentially build a career,” Boykins says. “Artists put so much of their time—and themselves—into their work. To see them compensated on an appropriate scale, it’s really comforting.” Technologists, meanwhile, say NFTs are the latest step toward a long-promised blockchain revolution that could radically transform consumer capitalism, with major implications for everything from home loans to health care.

Digital art has long been undervalued, in large part because it’s so freely available. To help artists create financial value for their work, NFTs add the crucial ingredient of scarcity. For some collectors, if they know the original version of something exists, they’re more likely to crave the “authentic” piece. Scarcity explains why baseball-card collectors, for example, are willing to pay $3.12 million for a piece of cardboard with a picture of Honus Wagner, a legendary Pittsburgh Pirate. It’s also why sneakerheads obsess over the latest limited-edition drops from Nike and Adidas, and why “pharma bro” Martin Shkreli bought the sole copy of Wu-Tang Clan’s Once Upon a Time in Shaolin for $2 million in 2015.

Some digital-art collectors say they’re paying not just for pixels but also for digital artists’ labor–in part, the movement is an effort to economically legitimize an emerging art form. “I want you to go on my collection and be like, ‘Oh, these are all unique things that stand out,'” says Shaylin Wallace, a 22-year-old NFT artist and collector. “The artist put so much work into it–and it was sold for the price that it deserved.” The movement is also taking shape after many of us have spent most of the past year online. If nearly your whole world is virtual, it makes sense to spend money on virtual stuff.

The groundwork for the digital-art boom was laid in 2017 with the launch of CryptoKitties—think digital Beanie Babies. Fans have spent more than $32 million collecting, trading and breeding these images of wide-eyed one-of-a-kind cartoon cats. Video gamers, meanwhile, have been pouring cash into cosmetic upgrades for their avatars—Fortnite players spent an average of $82 on in-game content in 2019—further mainstreaming the idea of spending real-world money on digital goods. At the same time, cryptocurrencies have been booming in value, fueled in part by celebrity enthusiasts like Elon Musk and Mark Cuban. Bitcoin, for instance, is up more than 1,000% over the past year, and anything remotely crypto-adjacent—including NFTs—is getting swept up in that mania.

Sensing an opportunity, tech entrepreneurs and brothers Duncan and Griffin Cock Foster last March launched an NFT art marketplace called Nifty Gateway. At the time, NFT art was just heating up in some circles, but it was difficult for newbies to buy, sell and trade pieces. Nifty Gateway prioritized accessibility and usability, helping fuel wider adoption. “It was such an early stage, we didn’t have many expectations about how it would turn out,” Duncan Cock Foster says. But Nifty Gateway users ended up buying and selling more than $100 million worth of art during its first year. Similar platforms, like SuperRare, OpenSea and MakersPlace, have seen similar surges; they typically pocket 10% to 15% of initial sales.

Big businesses and celebrities are getting in on the action: NBA Top Shot, the National Basketball Association’s official platform to buy and sell NFT-based highlights (packaged like digital trading cards), has racked up over $390 million in sales since its October launch, according to parent company Dapper Labs. Football star Rob Gronkowski has sold NFT trading cards of Super Bowl highlights for over $1.6 million; rock band Kings of Leon made over $2 million by selling NFT music. Twitter founder Jack Dorsey put his first-ever tweet up for auction as an NFT, and it’s expected to sell for at least $2.5 million. The past few months have been a feeding frenzy, with new highs almost daily. Perhaps Beeple put it best after his record-setting auction: “I’m pretty f-cking overwhelmed right now,” he told fans and collaborators gathered on chat app Clubhouse.

So-called whales are making the biggest deals in the NFT art world. These deep-pocketed investors and cryptocurrency evangelists stand to benefit financially from hyping anything remotely related to crypto. “A Winklevoss spending 700 grand on a Beeple or whatever is very much marketing spend for an idea that they are heavily invested in,” the technologist and artist Mat Dryhurst says, referring to Tyler and Cameron Winklevoss, two well-known cryptocurrency bulls who bought Nifty Gateway in late 2019 for an undisclosed amount.

For technology evangelists, meanwhile, the NFT frenzy is just more evidence of their long-held beliefs that cryptocurrency, and blockchain platforms more broadly, has the power to change the world in profound ways. Blockchain technology has already been implemented in attempts to make voting more secure in Utah, combat insurance fraud at Nationwide Insurance, and secure the medical data of several U.S. health care companies. Advocates say it could also help companies ensure transparency in their supply chains, streamline mutual aid efforts and reduce biases in historically racist loan-application processes.

“The potential societal impact … is so important that we should do everything in our power to make it manageable, environmentally and otherwise,” Whitaker says. “New idealistic technologies are always really imperfect in their rollout: they can have a speculative boom, and people can misuse them in unsavory ways,” she adds. “I try to stay centered on what’s possible.”

Number:
04
Insight:
As people approach the NFT space the communities they encounter have more of an impact than any particular platform.
Action: 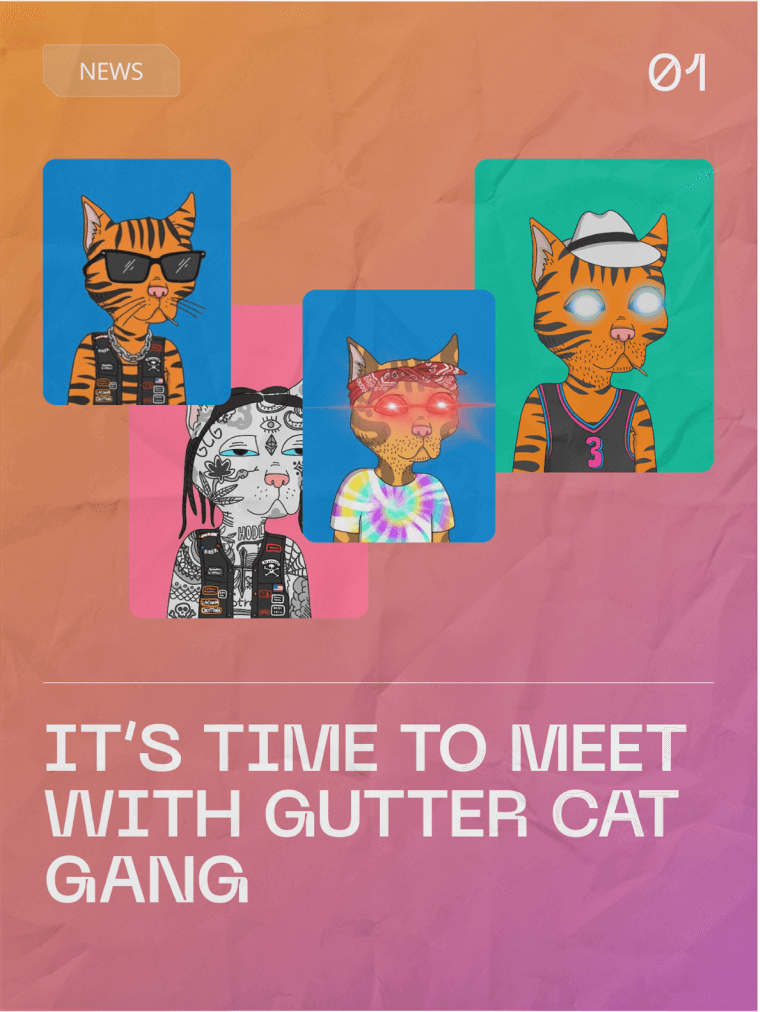